We have 461 guests and no members online 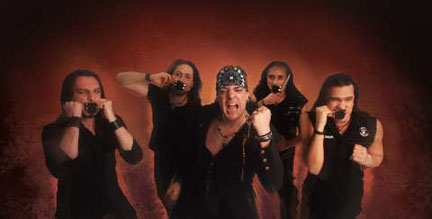 EMERALD SUN is a Power Metal band from Greece and “Under the Curse of Silence,” is their fifth full length release.  There isn’t anything mind blowing to this release; Power Metal is one of the most saturated genres around and it is very hard to shine so bright at this point in the game.  The bass and drums don’t stand out too much, but that might be due to the complicated production which highlights the vocals and guitar so much the other instruments kind of melt in the background.  However, I’ll be damned if this album isn’t catchy as hell with some wonderful melodies.

Guitar duo Georgiadis and Athanasiadi are the backbone of the band’s core sound.  Their riffs are standard but serviceable.  The leads, melodies and harmonies between the two are what really makes them, and the album, energetic and catchy.  Opening track, “Kill or Be Killed,” opens with fast rhythm riffs and a counter melody that races behind it.  The two guitarists are really adapt in complementing each other’s play styles.   Just when the songs, such as “All As One,” start to get a little boring with more of the same old Power Metal sound, a blazing solo backed with a speed metal rhythm or dual melodies will pop up and kick things back into high gear.

Tsakiridis has a decent voice and he doesn’t rely too much on constant falsetto which is fine because is regular singing tone is effective enough. “Weakness,” is ironically enough one of the best tracks on the album because the song encompasses everything in it that makes the band good in the first place.  The chorus is catchy although I could do without the background/gang vocals, which pop up with way too much frequency for my tastes throughout the album. “Journey of Life,” is the obligatory power ballad and, unfortunately, it kills the flow of the album.  The chorus is clumsy and without any power music behind it, the vocals don’t shine through enough to make an effective emotive effect on the ballad.

The album picks back up with “Rebel Soul,” that once again opens with some those awesome melodies and a solo.  The melodic riffs work well here and transition to the faster riffs with ease.  Another album highlight. This is a solid Power Metal album that will quench your thirst until some of the more high profile releases make their appearance later in the year.